I don’t know what you did last saturday but, given the fantastic weather (!), staying cosy with a good herbal tea or going out for a pinte of Guinness in the warmth of your local pub were probably the two most suitable options for the evening!

Otherwise, you could also try another alternative: running the Lyon Urban Trail by night! Which is, as it name suggests, a trail race in the city of Lyon. By night. Under the rain. Well, well, well…

And I bet you see me coming a mile off! Of course, I went for the rain and the mud! It’s been on my agenda for a long time and, believe me, giving up because of bad weather was not even an option!
For my first trail running race, I chose the smallest distance of 12km and had the pleasure to run with Mister Bio, who is not normally interested in official races.

We left for Lyon quite early in the afternoon and managed to grab our race numbers without having to queue up.
After that, and in order to avoid waiting under the rain for too long, we found shelter under one of the tents of the small race village located on the hill of Fourvière. And, around 7pm, we eventually joined the starting line!

Everyone was wearing a little headlamp, so it was really beautiful and it made the atmosphere quite unique! Rain was supposed to stop but in fact the exact opposite happened: it intensified just before the start! But we were so happy to start running that it was not really a problem. 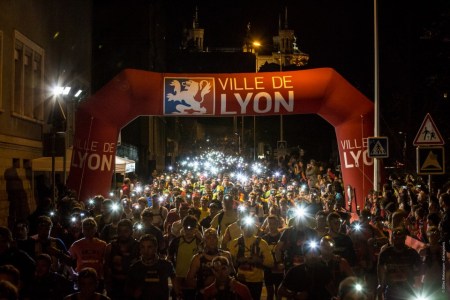 The first part of the race was quite easy as it began with a gentle slope towards St Jean cathedral. Nevertheless, we stayed very cautious as the road was quite slippery because of the rain and autumn leaves.
And right after this nice and easy start, it was time to really get down to business: a continuous succesion of steep uphill slopes, stairs, and muddy parts!

As far as I am concerned, I must say that I am not used to this kind of race. The effort is quite different from the one required during a classical road race. Rythme is obviously not consistent during the whole race, and you have to manage everything differently in order to have the necessary energy to  approach the most difficult parts with enough energy. Plus, given the difficult conditions on that particular night, it was also mandatory to remain careful in order to avoid stupid injuries.

I found this race really pleasant, varied and never boring. Even if it is a trail race in a big city, there were also some nice parts in parks, on a soft soil, and under the trees.
One of the best moment was without any doubt the muddy and slippery Sarra hill! It was originally an urban ski slope so you can imagine that it is not exactly flat…! It’s probably a miracle I did not fall during this part!

The other really strong point of the race was the magical view over an illuminated Fourvière basilica when we crossed the high “Quatre Vents” crossbridge. Definitely breathaking!

Not surprisingly, and despite the difficult weather condition, I totally loved this race that I completed in 1h38 (much much slower than a regular road race). It was so peculiar and different from what I was used to so far!
Plus it was also very well organised, with lots of different food during and after the race, really kind volunteers, and a state of mind quite different from the one I usually encounter in France during classic road races, more friendly and more eco-conscious also. For instance, I have not witnessed anyone throwing anything to the ground whereas it is unfortunately rather common during road races.

I must admit that I would have been quite happy to bring a little medal home. Yes, I know, we do not run for medals but I like them anyway! 😉

So, what about you? Have you ever run in similar conditions? Do you like trail running, or do you prefer road races?

And if you have never tried urban trail, here is a little film about Lyon Urban Trail that might make you want to try this next year! 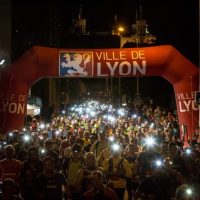 Adopting a cat near Grenoble

This blog uses cookies. Too bad you can't eat them! More info.